From aicamstir.com
Jump to navigation Jump to search

Arc welding procedures define the welding travel speed and the level of the welding power in terms of current and voltage. In a similar manner, the travel speed of a Friction Stir Weld will be a variable defined within the associated welding procedure. However, a FSW procedure does not define the welding power. Instead, the FSW conditions are defined by adopting a combination of the linear and rotation speeds of the tool. The power required to make a weld is the result of the torque needed to turn the tool at the chosen rotation speed. These notes provide a simplified set of equations for the prediction of the power needed to make a Friction Stir Weld. The final equation is easy to use and has a wide range of applicability.

A simple assessment of FSW

Linking between the parts of Friction Stir Weld physics

The primary parameters of a FSW weld procedure are the tool linear and rotation speeds. Therefore, unlike many other welding processes, the power needed to make a weld is not an explicit component of a FSW weld procedure. Clearly, the torque and force needed for FSWs are important because they can help to show whether the tool and the FSW machine have the capacity to make the weld or welds of interest. A trial weld could be made, but this may be dangerous if it is close to the extremes of the mechanics of the set up. Alternatively, advanced modelling software such as Computational Fluid Dynamics (CFD) is capable of predicting the welding conditions. The current page describes how it is possible to make a prediction of the power needed to make a weld (together with the associated torque) using a simple equation that can easily be evaluated in a spreadsheet.

The four components of the derivation are listed below and illustrated in the figure.

The temperature of the workpiece material at the tool, \(T\)

\(x, y\)    distances from the moving too as shown in the figure 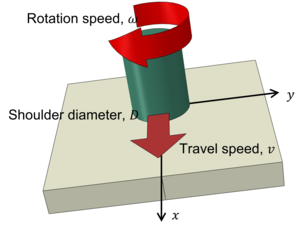 The strength of the workpiece material at the tool, \(\sigma\)

The torque needed to rotate the FSW tool, \(t\)

The power needed to rotate the FSW tool, \(P\)

Specific equations and derivation of the FSW power, \(P\)

Eager and Tsai [1] summarise the solutions for the temperature distribution around a moving heat source. Here, the Rosenthal solution for a semi-infinite plate is used. Other solutions could be adopted based upon the workpiece being welded.

With \(r\) equal to the total distance from the axis of the tool at the plane of the shoulder.

A simple assumption about the relationship between the workpiece material strength and temperature is made. The ambient value is assumed and a linear variation of strength occurs down to zero strength at the material melting point.

The torque is derived from a requirement to yield the workpiece material at the FSW tool. It is assumed that the stress on the face of the tool is equal to the strength of the material at the temperature \(T\) . Integration of this stress across the area of the shoulder (ignoring the presence of the pin) gives the following expression.

The FSW power is equal to the torque, \(t\), multiplied by the rotation speed, \(\omega\). Use of the equation above gives the following expression.